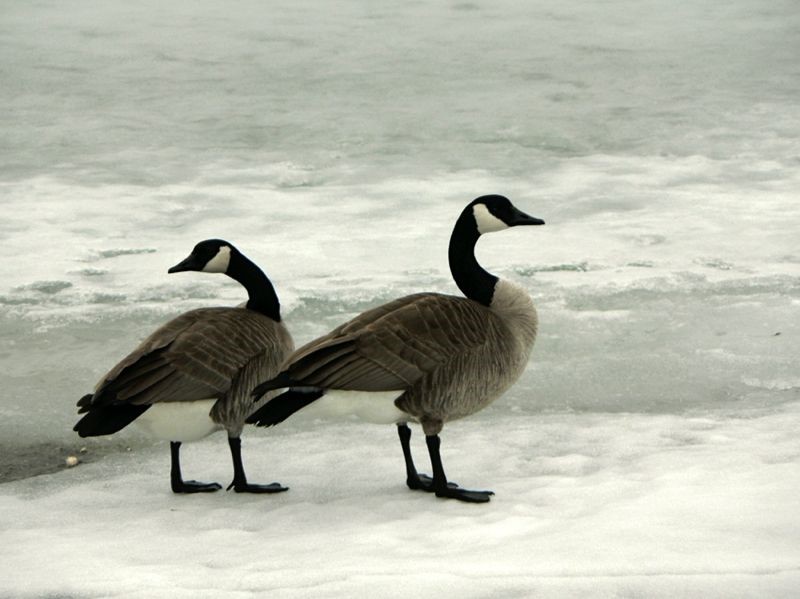 “Mummy, why don’t geese get cold feet in the freezing water?”

What a great question! We were watching Canadian Geese jump off the edge of the ice crust on our neighborhood pond at the time. And even my 3-year-olds know that heat always flows one way: from our nice warm feet to the cold surroundings. These birds have developed what is known as a ‘countercurrent heat ex

change’ system. Essentially, they have a way of stopping the heat from getting to their feet in the first place. So, they quite happily stand on the ice for ages because their feet are cold. And they don’t care!

This strategy has evolved several times in the animal kingdom: dolphins and turtles have a similar layout of blood vessels in their tails and flippers so that they can maintain their body temperatures even in icy waters. It’s also seen in the feet of Arctic foxes. And, of course, penguins. Too bad it doesn’t work that way for humans – as my husband would undoubtedly concur!

This month, we have been working on Conservation of Energy and the Laws of Thermodynamics. Why do these 19th-century tenets still matter so much today? If the geese don’t care – why should we?

Take liquid water: the stuff without which life as we know it would not exist. Its molecules are close enough together to feel attracted to each other – that’s what makes them stick together as droplets, for example. Heat the water to 100°C and a molecule will have enough energy to float off as a gas. Its temperature is directly related to how fast the molecules are jiggling about. When a liquid heats up, it takes up more space as molecules vibrate more energetically. In other words, they have reached ‘escape velocity’.

Why should we care?? These laws explain why it would be very unwise to fill a fryer more than half full of oil before immersing our Thanksgiving turkey into it. Or why milk all too easily boils over, making a frightful mess of the kitchen.

And while thermal expansion can be jolly useful in a thermometer, it often has serious consequences on a larger scale. As we all know, sea level has been rising steadily, and the rate of the rise is accelerating. True, melting glaciers add to the volume of our oceans, but this accounts only for approximately half of the current rise. The other half comes from thermal expansion. As the oceans warm, their water molecules simply take up more space.

The first law of thermodynamics says that heat will always flow from the hotter to the cooler object – that’s just the way it is – remember the geese? In the case of sea level, it’s moving from the atmosphere (where our burning of fossil fuels has led to climbing temperatures) to the heat sink of our oceans, steadily heating ocean surface waters.

Now, suppose you take that quantity of heat energy and transform it into work… That’s the stuff dreams are made of!

In many instances, we can control how fast energy is shared by using things that are either good conductors of heat (like metals) or poor ones (feathers, for example). Humans spend a lot of time trying to stay warm: we insulate our houses, double-glazed windows and use goose down coats and sleeping bags in winter Trapped air acts as an insulator-these geese really know what’s what! ?

But we also have a huge, invisible infrastructure for keeping things cold – food, pharmaceuticals (like vaccines), cars and homes during an Arizona heatwave all come to mind. Cold limits the amount of energy available for chemical reactions, so the energy needed for microbes to get stuck in and multiply just isn’t available. It’s why frozen food can have more vitamins than specimen that have been lingering in the produce section or have been cooked to death in tins.

Just imagine a life without fridges: there would be no ice cream. You’d have to go shopping far more often because fruit & veg wouldn’t last. And if you wanted milk, cheese or meat, you’d better live close to a farm. Yes, we can preserve food by pickling, drying, salting or canning. But that won’t help when you want a BLT sandwich in December!

From the moment food is harvested, an unbroken chain of cold stretches across our planet, connecting farms and cities, factories and consumers. Preventing atoms from having too much thermal energy is what keeps our food safe. There are scientists who devote their entire lives to inventing extremely clever methods for removing heat energy from matter. This is the field of cryogenics, and it’s also opening the door for improvements in medical imaging, quantum computers and a revolution in transport technology.

So, the next time you drop an ice cube into a drink, watch it melt and imagine tiny atomic vibrations sharing out energy, as heat flows from the liquid into the ice cube. We cannot see the atoms themselves, but the consequences of what they’re up to all around you are everywhere.

“The Law of Conservation of Energy tells us that we can’t get something for nothing. But we refuse to believe it.”

Happy Thanksgiving One and All!